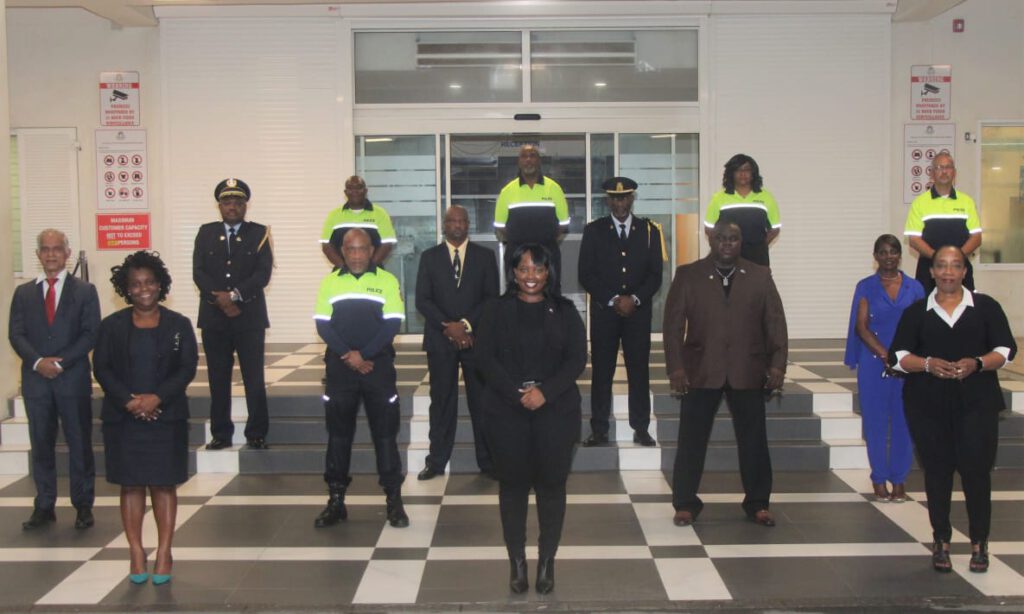 On Friday October 9, 2020 the Police Force of Sint Maarten (KPSM) kicked off their annual celebration with the planting of a tree in remembrance and honor of fallen police officers.

Minister of Justice Anna E. Richardson who attended the celebrations and was present at the tree planting ceremony participated by assisting in planting a tree.

Thereafter, a small ceremony was held whereby Minister Richardson delivered a speech that assured officers and management of the minister’s awareness that their job is far from an easy task and that their committed service to Sint Maarten is very much appreciated.

Minister Richardson also expressed her commitment in resolving the various challenges being faced within the Ministry of Justice.

To commemorate their dedicated service of 24, 30, 35 and 40 years to the Police Force of Sint Maarten several officers were presented with certificates to show gratitude for the hard work that they put into their profession over the years.

In acknowledgment of Police and Prison Officer’s week, Minister Richardson with the support of the Council of Ministers ensured that the Government Administration building was illuminated in blue over the weekend.

Over the years, Police and Prison officers would visit neighboring islands to participate in various activities to celebrate their week however due to the COVID-19 pandemic their celebrations were cancelled. Nonetheless, Management of KPSM and the Prison Activity Club along with Minister Richardson found it necessary to show their appreciation to staff. As such, on the evening of Constitutional Day, Saturday October 10, 2020, the Minister invited all department heads to the Administration building where a group photo was taken against the backdrop of
the blue lights. The Minister took the opportunity to share words of appreciation and recognition to the management teams within the Ministry of Justice for their hard work.

On Sunday, October 11th, 2020, Minister Richardson honored an invitation extended by the Prison Activity Club, by accompanying its members to service at the Good News Baptist Church. The Minister was invited to speak before the audience whereby she expressed her gratitude towards to prison officers for the display of unity and love under the holiness of Christ.

Minister Richardson stated that: “Being a Law enforcement officer is not easy and seeing officers put God first, to cover, guide, and protect them speaks volumes”.

Following the service, the prison officers invited the Minister to lunch to which she gladly accepted. During the luncheon, Minister Richardson presented a plaque to Officer Felicia Ruthsila who has served in the prison for 30 years and has started her retirement.  The Minister further expressed her gratitude to the prison officers for the invitation and stated that she looked forward to further developing a great working relationship.