By Government of Sint Maarten  /  May 29, 2020  /  Comments Off on Minister of Justice disappointed by decision to maintain inmates strikes at prison 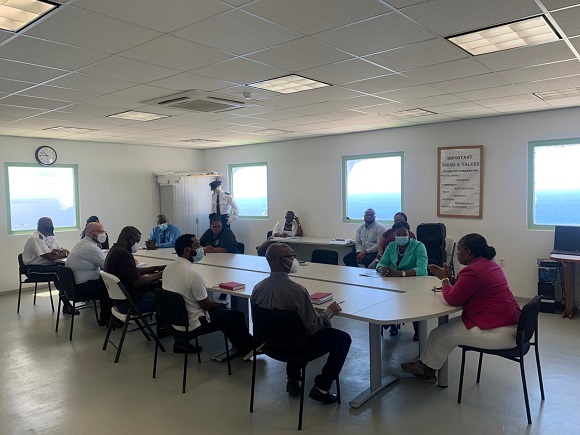 On Wednesday, May 27th, the Minister of Justice Anna Richardson held an emergency meeting with the management team of the prison and her legal advisors concerning the recent incidents that took place at the prison. With regards to the narrative that is being pushed in the media as it relates to the prison facilities and the recent incidents, the Minister finds this to be very unbalanced.

The current state of the detention facilities on Sint Maarten has been a source of concern both locally and internationally for a number of years. Especially following the damage caused by the 2017 hurricane season. It is no secret that a structured, structural solution to bring the facilities up to par is needed. However, it is unfair to paint a picture that the Ministry of Justice and by extension, the Government is not actively working to improve the conditions, not only for inmates but for employees as well. Being incarcerated is never a pleasure, however, it is unwarranted to assume that Government is not doing its part to improve the circumstances surrounding incarceration.

Concerning the injunction that has been filed by some 37 inmates, the Minister is of the firm opinion that it is without merit. Particularly the demand for penalties of 1000 USD with a maximum of 10 million USD to be awarded if the government and the Ministery of Justice fail to comply with the verdict. The Minister considers this action, encouraged by the legal representatives of the inmates quite an outrageous demand.

Despite the Minister having met with the inmates and their attorneys in two online meetings just days after taking office, the inmates and their attorneys are pushing a narrative that they are not being heard and agreements are not being met. In the meetings that took place, the inmates brought a number of their concerns to the attention of the Minister such as, prison capacity, COVID-19, and inmates who are allegedly missing information about their sentencing. The Minister took a keen note of the concerns brought forward. As a result of the actions taken by the Minister after the meeting, amongst other things the necessary evaluations were performed to identify inmates who were eligible for conditional release. The evaluation resulted in a number of inmates qualifying for early release and/or ankle bracelet monitoring.

Whilst efforts are in process to reduce the number of inmates being housed in prison facilities, the reality is also that there were persons who committed crimes and that had to be incarcerated, which added to the prison population. Law enforcement officials must continue to execute their jobs in maintaining law and order in the country. The Minister would like to remind the public at large that if a person is found to have violated the law, depending on the crime the consequences can be as mild as receiving a fine or more severe as being incarcerated at a prison facility.

It is important to note that the environment in a prison is largely influenced by inmates and their behavior. Even with a state of the art prison, it is imperative that the inmate population contributes to building an environment that is cordial and peaceful. All actions counter to this objective, severely diminishes the Government’s efforts and by extension that of prison management to maintain a safe and adequately secured facility.

At Pointe Blanche prison inmates are offered the opportunity to engage in activities that will contribute to their rehabilitation. There is literature available in the library and GED classes are given. Inmates can also make use of a gym facility which helps to promote a healthy lifestyle. This is all financed by the government but is only truly effective when inmates make appropriate use of these opportunities and facilities. The government spends thousands of guilders per month to ensure inmates receive balanced meals daily. Inmates also have access to adequate medical care. At the onset of the COVID-19 pandemic, the Ministry took necessary precautions to ensure the safety of the inmates and personnel. For the inmates this included providing them with anti-bacterial soap, facilitating training on how to best guard against COVID-19, and setting up online access so communication with family members and legal representatives would not be interrupted.

Being one of the Minister’s top priorities, diligent work is carried out daily by the Minister, her legal team, and the prison management, to take the necessary steps to remedy the conditions at the prison. In collaboration with the Ministry of VROMI, meetings and site visits have taken place to actively develop plans to construct a new facility. In connection with the aforementioned plan, the Minister of Justice has presented a proposal to the Council of Ministers for its approval which will subsequently be presented to the Parliament of St. Maarten to secure the necessary support. After having received this support the Minister will engage with all the relevant stakeholders to ensure their input and contributions and phase one of the action plan will be put into motion.

Ministry of Justice confirms; random search was executed at the Pointe Blanche Prison?