Royal Caribbean Group to Finance the Reconstruction of Philipsburg Marketplace

By Government of Sint Maarten  /  May 17, 2022  /  Comments Off on Royal Caribbean Group to Finance the Reconstruction of Philipsburg Marketplace 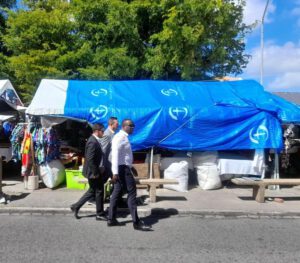 The Ministry of Tourism, Economic Affairs, Transportation & Telecommunications (TEATT) announced that the Royal Caribbean Group has agreed to reconstruct the Philipsburg Marketplace at the cost of Naf.600k.

The agreement was made possible during the past months through dialogue by the honourable minister of TEATT Roger Lawrence, stemming from the discussions and walkthrough that was done on February 2nd with Port St. Maarten and Royal Caribbean Group officials. The ministry sought out creative alternatives and the collaboration with the PSG and Royal Caribbean Group to get the project completed.

He explained that it became necessary to find creative alternatives for completing the project after available funds were reallocated to complete road repairs throughout the island as a result of the 2022 budget debate at the end of January.

The Philipsburg Marketplace has served tourists for many years as a central location to purchase souvenirs from their visits to the island. It sustained significant structural damage during the passing of Hurricanes Irma and Maria in 2017.

Critical to the reconstruction of the Marketplace is ensuring that it is built strong enough for protection from the weather conditions and elements. In the new design, vendors will be able to store their goods safely within the stall instead of having to remove all items on display daily.

The new and improved Marketplace will be wheelchair accessible and will feature designated parking for the offloading of goods by vendors. The Ministry of TEATT has also ensured that the new design considers the safety of vendors and patrons and says the facility will be equipped with fire extinguishers and surveillance cameras.

Within the minister?s assessment of the opportunities of the project to Royal Caribbean Group, Lawrence particularly outlined that the marketplace is strategically located in the heart of the island’s capital for easy access by cruise guests, serving as a tourist attraction that offers visitors a piece of culture and memorabilia, they can take with them on their return home.

each year, it makes sense to build partnerships that add value to the destination. Royal Caribbean Group’s contributions to our island’s sustainable redevelopment and continued partnership will also enhance their guest experience when they visit our island and win us significantly more return visits

According to the minister the Public-Private collaboration between the Government of St. Maarten and Royal Caribbean Group will go a long way in restoring activity in Philipsburg. The revitalization of Philipsburg remains a major goal in restoring the island?s economic activity to pre-hurricane Irma and Maria of 2017.