By Government of Sint Maarten  /  August 21, 2021  /  Comments Off on Public demonstration prohibited on Dutch Sint Maarten 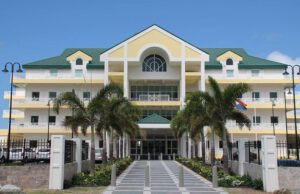 Saint-Martin Resistance organization notified the Minister of Justice of Sint Maarten, Anna E. Richardson that a protest against mandatory vaccination and health pass will be held on August 21, on French Saint Martin. The organization sought approval to cross from the Bellevue border and proceed towards the Union Road roundabout in order to turn around and head back to French Saint Martin.

Minister Richardson acknowledges the fundamental right to carry out demonstrations however, this fundamental right can be restricted under unusual and extraordinary circumstances. As such, after deliberations between the Ministries of Justice and Public Health, Minister Richardson and Minister of Public Health, Social Development and Labor Omar Ottley have decided to deny the request considering the following:

? The potential impact of a public demonstration may result in increased COVID-19 infections among the population. Adherence to the implemented COVID-19 health protocols would most likely not occur during such demonstration. Therefore, the potential increase of active COVID-19 cases poses an unacceptable risk to the public health of Sint Maarten?s population and its already overburdened healthcare sector;

? The government of Sint Maarten has also instituted a Ministerial Regulation banning mass gatherings in a bid to mitigate the spread of the virus among the population. Allowing a public demonstration to cross onto Dutch Sint Maarten would not only be in violation of this ministerial regulation, but would also have an adverse impact on accessibility to and from the Princess Juliana International Airport affecting travel schedules.

Considering the aforementioned reasons, the Ministers find unusual and extraordinary circumstances to be applicable warranting the restriction of the right to demonstrate on Dutch Sint Maarten. It is against better judgment to allow the demonstration to go ahead. As such, Saint-Martin Resistance demonstration is prohibited from entering Dutch Sint Maarten and undertaking a demonstration therein. Government will continue to take decisions in the best interest of public health and public order to safeguard its citizens and economy.