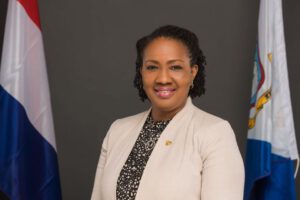 Today, Sunday, June 19th, 2022, the Honorable Prime Minister Silveria E. Jacobs, the Honorable Minister of Finance Ardwell Irion and their support staff are traveling to Aruba to attend four-country consultation meetings with the Prime Ministers of Aruba and Curaçao and State Secretary Alexandra van Huffelen. These consultation meetings which begin on Monday, June 20th, will serve as the platform to confirm the direction necessary in order to answer the questions and concerns expressed by the Parliaments of the Kingdom through their various reports on the Consensus Kingdom Law on the Entity for Reform and Development (COHO).

In preparation for these consultation meetings, technical teams of the countries traveled to Curaçao in May for pre-discussion where they identified the areas for which further discussion and consensus are necessary on a political level. ?The various reports from the Parliaments of the Kingdom form the basis for the discussions to be held, as such, the outcome of these meetings will determine how the countries proceed with the Kingdom Law. St. Maarten remains determined and looks forward to fruitful negotiations with our Kingdom partners,? stated Prime Minister Jacobs.