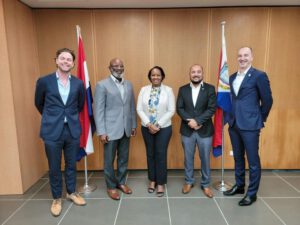 Prime Minister Jacobs stated, ?Construction of the Airport Terminal is scheduled to begin by October 2021, and will last just over a two-year period. I am elated to learn that the chosen company will be employing local contractors and workers to complete the reconstruction of our International Airport. After some delays and challenges, we have finally made it to this point whereby we are now able to begin the process that will get our International Airport back online at full capacity.?

The Airport Terminal Reconstruction Project is jointly funded by the European Investment Bank (EIB) and via a loan from the Government of St. Maarten?s Trust Fund. The Sint Maarten Trust Fund is financed by the Government of the Netherlands, managed by the World Bank and implemented by the National Recovery Program Bureau.

NEXT ARTICLE →
Roger Lawrence sworn in as Minister of Tourism, Economic Affairs, Traffic and Telecommunication