By Government of Sint Maarten  /  November 25, 2021  /  Comments Off on Minister Doran explains Alegria Case. Country Sint Maarten has obtained a suspension of any fines claimed by Alegria 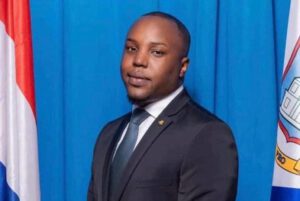 The Honorable Minister of Public Housing, Spatial Planning, Environment & Infrastructure Egbert Doran clarified apparent misunderstandings surrounding the Alegria case as it pertains to the request of the payment of fines.

The Minister of VROMI explained that he would not go too in-depth into the specifics of the case as the matter is still being litigated in the courts, however, he would like to shed some light on the situation for the Sint Maarten community to have a better understanding thereon.

?In 2016 Alegria requested water rights for approximately 14,000 m2. When I took office in 2020, this request was still pending. Alegria filed an injunction case to have their request decided upon. Without my permission and without me knowing, a highly placed civil servant informed the then lawyer of Country Sint Maarten that Country Sint Maarten had agreed to a settlement. This was not the case and legal measures have already been taken against that individual for their actions.

?To summarize, Country Sint Maarten has obtained a suspension of any fines claimed by Alegria and this suspension shall last until a verdict is rendered in the civil appeal case by Alegria. The Alegria matter is a complex one as two appeal cases are going on at the moment: one by the civil appeal court and one by the administrative appeal court. It is regrettable that certain media outlets chose to publish an article without contacting me or the Cabinet of VROMI for further clarification. However, I hope to have clarified the matter today,” Minister Doran stated.

Council of Ministers meet with CCSU members on the way forward