By Publisher  /  November 26, 2020  /  Comments Off on Audit Chamber recommends rapid COVID-tests but warns against a false sense of security 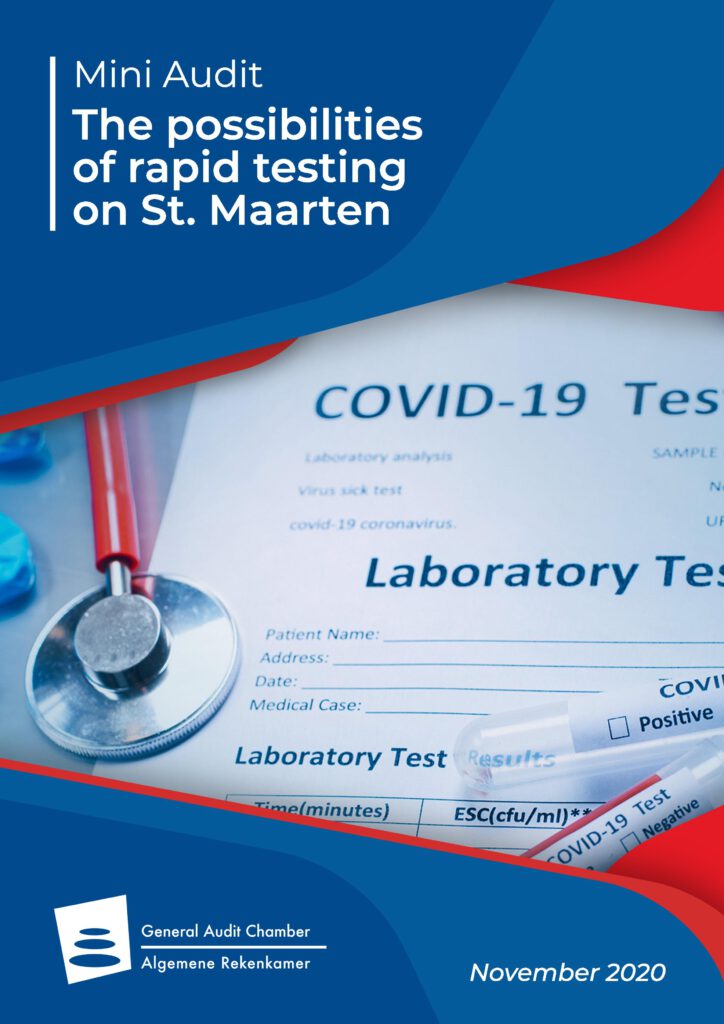 PHILIPSBURG – “The pandemic will last for a while longer and the challenge is to find the right balance between health and the economy,” the General Audit Chamber writes in its mini audit The Possibilities of Rapid Testing on St. Maarten. “Rapid testing is not a panacea. Regular testing can lead to a false sense of security. The point of departure remains: maintaining safe distances, sneezing in your elbow and wearing masks in public places.”

The audit compared the PCR (polymerase chain reaction)-test with rapid testing systems in terms of reliability, availability and costs.

The PCR-test is considered as the most reliable test, but it is expensive and complicated and there is a scarcity of tests and testing materials. In St. Maarten a PCR-test costs 126 guilders ($70.40) and it takes from one hour up to five days to get results.

The Dutch government has declared several rapid testing systems as “sufficiently reliable.” They are cheaper and faster, giving results within fifteen minutes. The Netherlands will make rapid COVID-tests available to St. Maarten, Curacao and Aruba.

From mid-March until November 22 (the cutoff date for the audit) St. Maarten performed 7,200 PCR tests, of which 1,373 at the airport. There are 1,007 registered infections and 25 registered corona-related deaths. On a population of 40,733 that is a positivity rate of 14 percent. On average, there are ten new infections every day.

The country’s maximum capacity for PCR testing is 256 per day. St. Maarten Laboratory Services (SLS) has 700 tests available and the Health Care Laboratory (HCL) has another 400.

Antigen rapid tests should cost no more than $5 a piece according to the World Health Organization, meaning that St. Maarten could perform more than 18,000 of these tests with the currently available budget.

The audit makes the case for rapid testing, because it would support the economy. It would lead to more economic activity, more turnover, more employment and more revenue for the government, the report states. “Additional testing will lead to a return to a (more) normal society and a faster return of tourism.”

According to the audit, the country needs to develop a policy ahead of the availability of vaccines. That policy has to establish who will be the first to qualify for vaccination, what the requirements are to obtain group immunity and project costs and systems for transportation and distribution.

Adequate information is also of the essence, the Audit Chamber points out: “A single negative result from a rapid test is no guarantee that a person is free of the virus.”

TNO developed the so-called LAMP–test that is currently used by Heathrow Airport in the United Kingdom. LAMP stands for Loop isotherMal amPlification. The Dutch ministry of public health has declared that this test can be used immediately, but the VSA-ministry stays away from it, citing “insufficient scientific evidence from the RIVM (the National Institute for Public Health and Environment).” For the same reason, VSA does not want to use the breathalyzer-test that is already used in the Netherlands and that gives results within one minute.