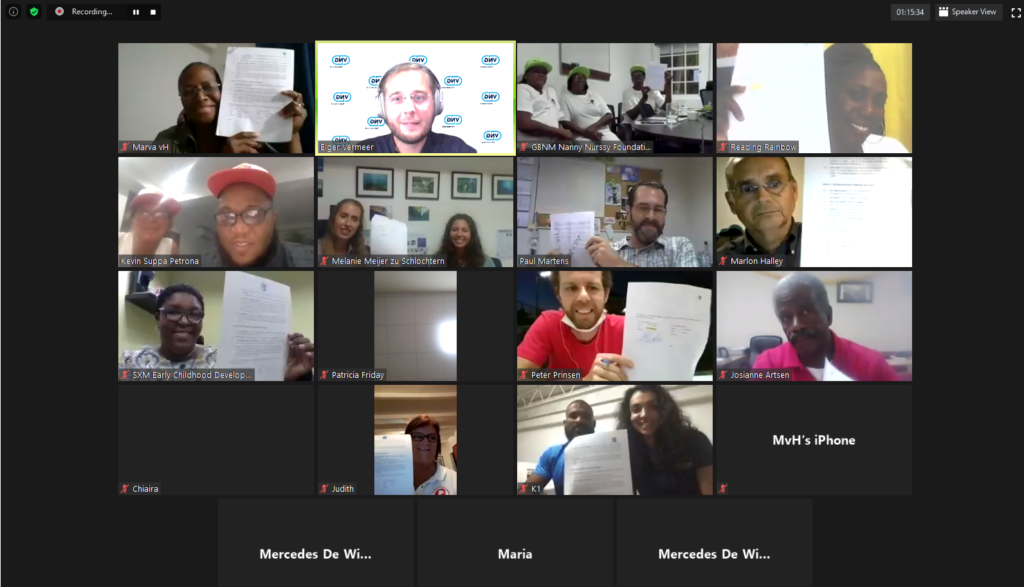 PHILIPSBURG —  The Resources 4 Community Resilience (R4CR) project was officially launched during a Zoom meeting and Facebook livestream on Wednesday November 18. The ceremony was hosted by radio personality Kevin “Suppa” Petrona (who is also the local R4CR Communication and Outreach expert) and Jose Sommers (R4CR Capacity and Training Manager). The R4CR program is a grant scheme that focuses exclusively on financing and strengthening local Civil Society Organization (CSO’s). The program is financed by the Government of the Netherlands via the St. Maarten Trust Fund. The latter is administered by the World Bank, implemented by the NRPB ( National Recovery Program Bureau) and executed by the VNGI (Vereniging van Nederlandse Gemeenten International) in close cooperation with the NRPB, Foresee Foundation and other local partners.

Leading the small cast of speakers at the event was Chris Johnson, Dutch Representative in Philipsburg, who commended the CSO’s (also known as NGO’s) on their remarkable resilience for helping people during difficult times. He fondly recalled the tireless work of the late Cassandra Gibbs and what her I Can Foundation did for children in need. “ On behalf of the Netherlands we are very happy that the R4CR program is taking place and congratulate the NGO’s who received a grant to execute their project” Johnson stated.

“ We here at the NRPB are proud to be a part of the R4CR launch,” Director of the NRPB, Claret Connor, said. “R4CR directly supports Civil Society Organizations by funding local initiatives. The project will allow these CSOs to continue their commitment in tackling poverty, championing environmental protection, taking care of the elderly, investing in daycare and after school programs, violence prevention, and much more.” Claret Connor is also chairperson of the Project Technical Committee which is an independent body in charge of vetting R4CR grant projects to ensure compliance with the various World Bank and Trust Fund regulations.

The World Bank was represented at the launch by Alex Kamurasi and Arsala Deane who both emphasized the important role CSO’s play in the local community but also the World Bank’s commitment to assure the project achieves its main objective which is to ultimately improve the lives of the Sint Maarten people.

Closing off the official part of the launch was Elger Vermeer, Program Director of the VNGI, who (together with colleague Eline Vermeer) flew in from the Netherlands to clear the last operational hurdles to R4CR’s full scale launch. Mr. Vermeer stressed that the R4CR program is not only a funding mechanism that will help CSO’s build and strengthen their capacity, but more importantly it is a platform for the CSO’s to exchange ideas, experiences and establish a growing network. “ The CSO’s are the heart of the local community and therefore the heart of the R4CR program” he concluded.

After the official speeches, host Kevin Petrona transformed into radio personality “Suppa” and gave each of the twelve grant recipients exactly one minute to pitch their project to the public.

centers with an after-school grocery program, a food handlers course and a train-the-

grant is a collaborative effort between R4CR and Samenwerkende Fondsen.

hurricane Irma and upgrade the facility to cope with the COVID-19 realities.

purchasing their much needed medication and securing lab tests.

were damaged by hurricane Irma.

damaged by hurricane Irma. The foundation hopes to give the homeless, the needy and

the infirm a decent place to recharge

The launch ended with the symbolic signing of the grant agreements in which all twelve CSO’s simultaneously lifted their pen, their grant agreement, signed and showed the signed document. That marked the official launch of the R4CR project in which 452 thousand US dollars will be invested in the Sint Maarten economy via local CSO’s.

The next step in the process is the Pre-Disbursement Training (PDT) which the CSO’s will complete before the funds can be (partially) released to their projects. The PDT is scheduled for Monday and Tuesday (Nov 23 and Nov 24) at the gym of Hillside Christian School (Asha Stevens Campus) in Cay Hill.

For more information about the R4CR program or details of the selected projects please visit www.r4cr.org or the Facebook page (R4CRSXM).