~ In the mold of a Colmado and Bodega ~

ST. PETERS -- The district of St. Peters and surrounding neighborhoods will benefit this week from the opening of the area's first mini-market with a focus on daily home essentials.

Teo's Superette is a mini-market in its truest form and in the mold of the well-known neighborhood Colmados of the Dominican Republic and Bodegas of New York City. No bigger than an average bedroom, Teo's may be mini in size but packs a big punch in terms of daily essential inventory. It opens on Tuesday, August 4.

The brainchild of local businessman Michael "Mike" Granger, the mini market, he said, is just the first step into the food retail market but a very important one for him personally as a local businessman. "Like any business, setting up a mini-market is not easy. Retail in 2020 is definitely a challenge. The project has been in the planning since 2016. Hurricane Irma was a major setback and COVID-19 is no better. But we simply weren't going to delay this project any longer, it was now or never," Granger.

In the past three years since hurricane Irma and in particular, in the COVID-19 period, market analysis has shown that the public has most adhered to this type of business. "Nowadays families have been modernizing to the point where they no longer carry out those famous major purchases once a month. Currently, going to the market is more frequent because people are choosing to buy smaller, everyday items every so often."

In this regard, a mini-market can meet the consumer's needs at any given time. "Our location also benefits our medium-to-low income area where folks either have to walk down to the main road of St. Peters to go to a supermarket or even take a bus just to get a small number of necessities. We are situated in an area that eliminates that trek," Granger explained.

Teo's Superette is located along a very busy bus route at Soursop Road 2. It is at the same location as Granger's other business venture "MiliMari Bar & Restaurant." He explained that the bar and restaurant were partitioned to accommodate the mini-market. Besides everyday essentials, patrons can also top-up their phones via TelCell and UTS and play the lotto with Caribbean Lotto. “We have some other key services planned in the near future for the convenience of the folks in the area.” 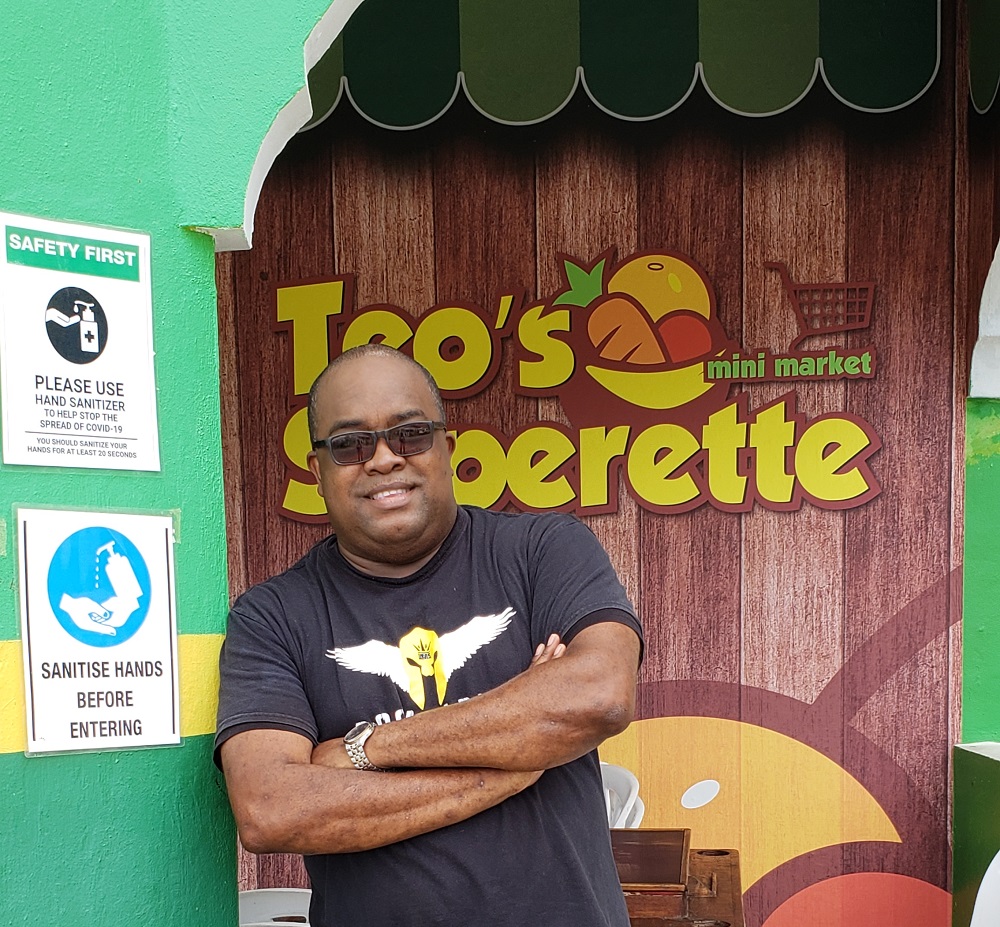 For Granger, it is also a sense of pride to be involved in a market that most people have advised that locals should not be involved in, even with something as small as a mini-market. "I could not for the life of me understand why more locals weren't involved in the supermarket business. To live in a country where locals were not involved in the most vital of industries? This didn't sit right with me and sounded like a challenge. And I have this habit of running headfirst into any challenge," he said.

Granger explained that the supermarket business can be very intimidating with very aggressive players in the market. "The practices we have encountered were a learning experience. You are way down on that totem pole of importance and in many cases you are treated as such. Nevertheless, we found our bearings quickly and expect to learn much more along the way," Granger said.

He continued: "We simply want to serve this community and give folks of the area and those who come to the district, the convenience of not having to go far for basic daily needs at affordable prices. We leaned heavily on the neighborhood Colmado and Bodega concepts and we hope the neighborhood will embrace us as a vital, necessary local addition."

The mini-market is named after his son Mateo and the bar & restaurant after his daughters Milica and Maria. Granger, a journalist by profession, also runs a Media Consultancy company “MiliMari Media” and recently ended 25 years of political affiliations and involvement to focus exclusively on his business ventures.